Councillors, even better than your Dad! 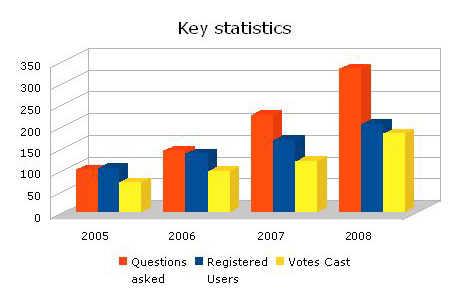 The I’m a Councillor evaluation report for 2008 is now ready. Topline results for this year are that councils were busier than ever before. The average number of questions asked per council is 331, by an average 203 users. Compare that with 111 questions asked, by 126 users in the average council in 2004 and you can see the huge growth there’s been.

This is partly due to great work by councils and teachers. Thanks! But another reason, we think, is that schools now have much better ICT facilities. And teachers and students are more computer literate. So it gets easier and easier to engage schools using a project like this.

The other really striking finding was that 68% of students surveyed used the site in their own time, at home, having been introduced to it at school. As one teacher said, ‘They don’t usually do that with their
school work!” This is up from 50% last year. Users also spent 40% longer on the site and visited 40% more pages.

We can’t say really what’s caused this, but we suspect it is the re-design, which has made the site more attractive, user-friendly and easier to navigate. In particular I think the gallery of councillors at the top has made the site much easier to find your way around, and far more interesting looking. I have to confess this was Shane’s idea (although he may have nicked it from the X Factor site).

The report also has lots of feedback from young people, councillors, teachers and council officers. The title of this post comes from my favourite quote:-

And what greater accolade could there be?

New member of the team…

Hi, I’m Hannah and I’ve just joined the Gallomanor team. I’ll be helping to organise the ‘I’m a Scientist’ and ‘I’m an Engineer’ events, starting with those coming up very soon in March. I’m looking Read more…

Loin of Lamb and Apple Charlotte

Last Friday Sophia and I finally made it to Oxford to have dinner with Dr Mark Roberts, winner of the Fluorine Zone in June 2010. Mark and his girlfriend Elsa had joined us for our Read more…

No, let’s NOT sack all the science writers

Update: Dr Goldacre has taken exception to this interpretation of his remarks in the I, Science interview. We would like to make absolutely clear that Dr Goldacre does not advocate the sacking of all science Read more…