Discrimination against young people happens, and it’s not on 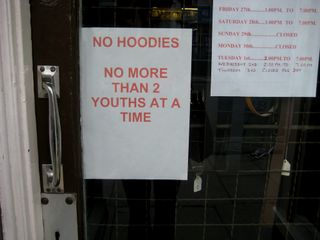 “The provisions will not cover people under 18. It is right to treat children and young people differently, for example through age limits on alcohol consumption, and there is little evidence of harmful age discrimination against young people.” [my italics]

The Equality Bill was published on Monday. One of it’s provisions is to outlaw age discrimination for those over 18. As the quote from Harriet Harman indicates, the government have assumed that young people aren’t affected by age discrimination, so we didn’t need to bother about them.

In I’m a Councillor we see thousands of questions, and tens of thousands of lines of chat, from a broad spectrum of young people. It’s very clear from this that young people are often discriminated against, and that it makes many feel marginalised and excluded from society. If shops had signs that said, ‘only two black people in this shop at
any time’ we’d be outraged (and quite rightly). But no-one bats an
eyelid at similar signs about school children.

Young people are frequently treated with suspicion by adults and excluded from public spaces. Shopkeepers follow them round the shop or exclude them. Old ladies cross the road to avoid them and glare at them as if they are muggers. They get hassled by police and moved on just for hanging around a street corner doing nothing, when there’s few other places for them to go. Police officers routinely order them to remove their hoods. Remember, nearly all of these young people are as blameless as you and I.

Being constantly distrusted and harrassed, with no recourse, no way of saying, ‘that isn’t fair’, just because you are young, has to affect young people’s happiness and sense of belonging. I can’t help thinking that those years of exclusion do not lead to healthy, happy, balanced adults, or a healthy, happy, cohesive society.

I’ve had conversations with people in other professions who have no idea of the kind of thing that happens to young people, or the way they feel about it. Sometimes they just don’t believe me. That’s not that surprising, we live in an age-segregated society and there are few young people’s voices in the mainstream.

But I would have thought that the Government Equalities Office would be a little bit more informed on the matter. And if they didn’t know about it, you’d think they would try to find out – like maybe ask the Children’s Rights Alliance, or the Children’s Commissioner.

It’s not really good enough to say ‘there is little evidence’, when what you mean is, you assumed there isn’t and so you didn’t look for it. Especially when you are drafting a wholesale overhaul of equalities legislation in the country.

Fortunately, the Young Equals coalition have stepped up to the plate and today published their report, ‘Making the case: why children should be protected from age discrimination and how it can be done’ (pdf). They give some of the evidence the Equalities Office missed about discrimination against young people, and what can be done about it. We commend their report to you and hope that the government listens.