In the space of one week Twitter has flexed it muscles and had a significant effect that organisations public and private should wake up to.

On Tuesday news came out of the injunction imposed upon the Guardian preventing them from publishing about a Parliamentary Question or even the fact they were not allowed to publish it.

That morning Twitter was afire with indignation and en masse people published links to reports about Trafigura and Carter Ruck.  By lunchtime Carter Ruck had caved in on the PQ injunction and the mass media were free to write about that issue.  Some calmer heads pointed out that although a minor victory had been won the original injunction on the Minton report stood.  Still it felt like the citizens using Twitter had come to the defence of the Guardian and their right to report on Parliament.  It felt like that popular public support over-ruled the High Court that imposed the injunction. 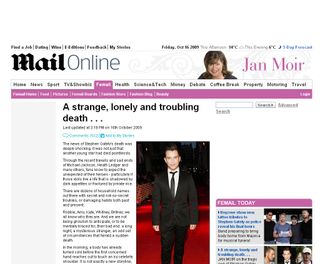 So fast-forward to Friday and in a delicious piece of irony Twitter flexes it muscles again.  This time however it is an attempt to gag the mass media.  Jan Moir, a Daily Mail columnist, wrote a pretty despicably homophobic article about the death of Stephen Gately.  The Twitter-verse got typically angered by it and started to ask the companies advertising on the page to remove their ads.  And the Daily Mail & advertisers caved in. (See white space in screen grab)