Engagement that gets participants REALLY excited

Today we are excited to announce the winners of the Healthcare Engagement Strategy Awards 2010.

“Today I am very excited to announce yet another step along our data portability journey.”

Don’t get me wrong. I’m sure the people quoted above really were very excited about their products and launches. I’m not good at self-promotion, so it makes me incredibly proud to see the level of excitement that participants in I’m a Scientist are showing with still nearly 4 weeks to go before the event starts properly.

The scientists were selected on Friday based on ratings given by students and teachers who are participating in the event. It was not an easy process.  Nearly 200 scientists to fit into 100 spaces. Some very good scientists discarded at the end.  Next year…

An email went out Friday night and the first tweeting started soon after.  Sophia has already built an I’m a Scientist list of those who we know are on twitter (currently 20, but I expect it will rise).  But 140 chars is a little limiting.  This morning however I read a couple of blog posts from two of our participants and my chest swelled with pride by the way they wrote about our event and their EXCITEMENT about taking part.

I can’t sleep, I’m distracted, I keep breaking out in a cold sweat.  And the reason?  I have a deceptively simple question going my head – and I don’t know the answer!

“I confess to being a little bit terrified.”

Stephen: “there is an impressive total of 100 scientists taking part – split into twenty groups of five.”

Andrew: “My fellow scientists – whom I suspect will wipe the floor with me, being younger, brighter and funnier than I am”

and there is already jostling and positioning occuring via Twitter.  This series of tweets from @LisaMarieke makes me giggle: 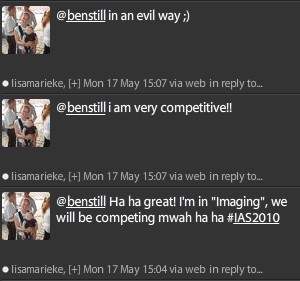 Followed by this a few hours later 😉

We’re lucky that we’re working with a group of people, scientists, who are so passionate about their work that they fight to give up their time to talk about it, but credit also needs to go to Sophia (aka @imascientist) for tirelessly encouraging scientists to apply and making enormous efforts to spread the word about how enjoyable the event is. It’s also the small things such as being quick to publish a list of participants, to create a twitter list. It’s the smart things like getting students and teachers to rate the descriptions given by the scientists. It’s because we are doing it large.  As Andrew Maynard, who has some experience of science engagement, says:

The next I’m a Scientist event is humongous – 100 scientists, 400 classes, and 8000 students. Eight Thousand! The scientists and students are divided into twenty groups, each with five scientists battling it out to be the last one standing at the end of the two weeks, and each group engaging with around 400 students.  This has to be one of the biggest events of it’s kind around – 8000 teenagers getting the chance to talk in some depth with real-life scientists on any subject they fancy (8000 – I can’t get that number out of my head. 8000!)

But it is also because, in the end, it is a great project that engages young people and scientists

Ever since we established I’m a Scientist here in the UK we looked to expand overseas. The phenomenal success we’ve had in the UK has however kept our attention here, with a few notable exceptions. Read more…