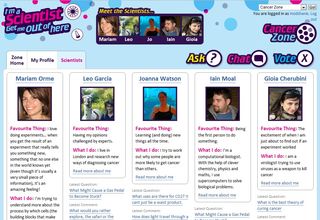 I’m buzzing. I’ve been buzzing for 9 days now. Why am I buzzing? I’m a Scientist, Get me out of Here! is on.

I’ve been running this type of online engagement event for 8 years now.  You’d have thought I’d be used to it by now, but almost everytime the event blows me away.  This time though there has been a combination of factors that have all worked together to create something that seems truly special.

We’ve rebuilt our website. Back in 2003 when we started we had a pretty amazing site too, but technology has moved on and so we needed to as well. Back in December we started the process of specifying the site again from the ground up without changing the basic way that the event works.  It is now built on WordPress and works like a dream. There are many changes on the site but the main thrust has been to make the site more conversational. Scientists answer questions together and any student or scientist can reply with a comment. Everyone has a profile and students can choose an avatar.  Questions and comments link back to profiles. There are lists of recent and interesting questions. Everything can be deep-linked. The site is social.

The scientists are social

We knew there would be some camaraderie with the event. After all with 100 scientists taking part some are sure to know each other, others are sure to get on. We’ve been astounded though by the amount of mixing that has gone on.  Much of it has been made more visible through Twitter and the #IAS2010 tag. But it is happening in the real world. Scientists from the same institute are meeting and talking I’m a Scientist.  They are leaving comments on the site for each other and on their own blogs.  So far there have been 1,173 tweets about the event.  The majority from the scientists and other onlookers. But the numbers aren’t the amazing thing.  Scientists have being goading each other on and swapping tips.  Then today the core group on Twitter suddenly decided that there should be more media coverage for the event. This wasn’t prompted by us.  The scientists, the people taking part in this event, decided to message their press contacts asking them to cover the event. You can’t buy PR like that.

What some scientists are saying:

“so far the event hasn’t so much been about scientists educating students, as students training scientists – training them to listen to what’s being asked, and to reply concisely and in terms that the questioner can understand.  It’s been a fascinating process to watch.  And judging by the speed with which peoples’ style of reply has evolved, it’s been a very successful process!”

It is hard to convey the sheer intensity of the experience.

If any scientist is feeling jaded, run down, disillusioned with their lot, I thoroughly recommend IAS therapy. The energy, the intensity, the free uninhibited approach to asking science questions displayed by a class of energised and interested teenagers, is far better for the scientific psyche than any shrink could manage, it got me pumped again.

The scientists are designing the next iteration

With every site and event you build, you try to involve your users as much as you can. We did and we’ve run 3 pilot/test/warm-up events and still new ideas and features are pouring in. They are pouring in because the scientists are immersing themselves in the event totally. It is very important to them. We are also making it easy for them to let us know. We’re responding to email, twitter, the telephone.  We have a staffroom chat page. Every chat is opened 5 minutes early and the scientists often arrive then and chat with the moderators. Thankfully the suggestions are just small tweaks and improvements, but we take them seriously because the more usable the site is for scientists the more likely they are to take part in the future, and it is the scientists that the students are here to talk to.  And, boy, are they here to talk.

The students are asking questions

We’re at the halfway mark and we have just over 4,000 student signed up.  They’ve asked over 6,000 different questions and taken part in over 130 live chats.  In some zones, like Cancer, it has been brutal. Over 650 questions. Others, like Evolution have the mere average of about 270 questions.  But as always the numbers don’t really tell the story.  You need to read the questions to get a sense of what interests the students.  Some are straightforward, some look ridiculous until you think about it and read what the scientists answer, but all show that young people have an enormous curiosity in science and the world around them.

“what do you think the five most important qualties are for a scientist?”

“Do you think global warming will kill us?”

“If your project ever goes wrong do you carry on or give up until you find the answer you predicted or want?”

Ever since we established I’m a Scientist here in the UK we looked to expand overseas. The phenomenal success we’ve had in the UK has however kept our attention here, with a few notable exceptions. Read more…