Science is Vital – and so is the campaign strategy 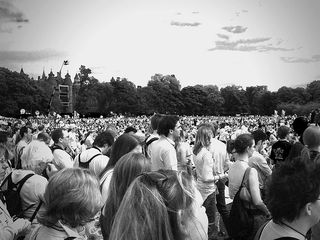 Last Saturday I listened to Evan Harris talk about some failures, in his keynote at the Science Online London conference.  He wasn’t trying to be negative, just making very valid points about the complexities and subtleties of changing government policy.

I hope Evan has explained the first one elsewhere, but I want to return to the second issue because already this week his words have become more relevant.

On Wednesday morning Business Secretary Vince Cable implied on Radio4 that severe cuts in science funding were on their way. Plenty of people have commented already on this and the myopically-challenged Jenny Rohn has leapt into action with a Facebook group to gather support for a march to protest against the upcoming cuts.

I applaud the effort and it is the right starting point to try and get some changes made. Rather than putting my thoughts on the Facebook group and dissipating the energy that is building there I wanted to write some notes here about what the campaign needs to consider based partly on my experience working on the Robin Hood Tax campaign earlier this year.

1. Choose the enemy wisely – cuts are going to come. A campaign might have the chance to influence where, when and how those cuts are implemented. Some of the arguments that Cable gave have been well refuted.

2. Hearts and Minds – every campaign needs to work on both levels. The Robin Hood Tax Campaign excelled at winning hearts. It had 300,000 supporters within a fortnight. Superb. But it didn’t have the minds sorted from the outset. The economic arguments were not watertight, the consequences had not been thought through fully. So when criticism came, and it did, the campaign wasn’t fully prepared.  As Evan said at the weekend policy-makers will react to a sound rational argument and if public opinion is behind the argument all the better.

3. Coalitions – they’re helpful for gathering support for a cause, but they make decision-making unbearably slow. Also make sure you’re in with the right people. It was suggesting on the Facebook group that there might be arts groups that could be campaigned with. I think the reality is that science needs to fight for itself. Cuts are coming. It is about prioritisation. If that means science comes above arts then so be it.

4. Timing – The Comprehensive Spending Review is published on October 20th.  I don’t know when the final changes get made but there isn’t much time.  Let’s not leave it too late.

5. Opportunity – Is the inevitable cutting of funding an opportunity for change, for the better? What needs changing? Funding processes? Publication process? Peer review? Career advancement? Can positive changes be forced through by the science community as part of cuts package?

So what should be done:

1. Clarify the campaign objectives – make them realistic, yet aspirational. Make Poverty History was aspirational, but the main targets were solid feasible figures of development expenditure. The campaign isn’t going to stop a programme of cuts, but it might affect the amount of cuts, how the cuts are implemented and get some changes made.

2. Create a central space for the solid rational arguments against the cuts. They have been made already.  Bring them together in one place. Create an overview (get a really good writer to spend a few hours polishing it if possible), find some case studies showing what would be lost, illustrate the damage that happened previously, highlight what other countries are doing. Bring together all the collateral you need in one place. Don’t expect the site to be the centre of the public campaign but make it a place for policy makers and journalists to get the information they need.

Keep the Facebook group and Twitter campaigns going. To win the hearts (public opinion) you need to be where the people are, but don’t lose sight of the need to influence the policy-makers in BIS and the Treasury.

3. Make it easy to take part. Make Poverty History mobilised 3 million people in the UK. My 75 year old aunt went on a demonstration in support. They succeeded because they made it easy for people to be involved. Whether it is through wearing a white band, red nose, or twibbon, find ways for people to demonstrate their support. At the next level encourage people to do something more: display a real world badge or poster; write to their MP or member of the House of Lords or even better visit an MP surgery. Supporters might then write something for their local paper; join a march; wear a T-Shirt; help write case studies and arguments to convince treasury officials of the benefit of science.

4. Decisions need to be made if the campaign is to present a unified face. If funds are needed then some governance is needed to look after them. A few of the more passionate people need to step forward and form a decision-making unit (or committee as they are usually known).

5. Move quickly. BIS want to “work together” with the Science Community. Grab the opportunity, not to appease them and agree to cuts, but to influence how the cuts get made and to get changes that you want in place. As President Jed Bartlett once said, “Decisions are made by those who show up.”

6. Get some celebrity support – it might not do much for the rational argument, but celebrities sell papers and improve ratings. Make sure they are NOT scientists. You want to get non-scientists supporting the campaign so it is not seen as a job protection.

I’m not a scientist but I care deeply about how this country regards science. I don’t want to tell this nascent campaign what to do, but I hope that those who stand up to run it do find something useful in what I have written here.

Awesome advice, Shane: thanks so much for this.

This is a great post. Following on from no.5 – at the AMRC Medical Research Reception this summer they presented Willetts with a ‘Challenge for Government’ showing the value and importance of medical research. At the reception Willetts said (not direct quote) ‘this is exactly the sort of thing I can take to the Treasury’. AMRC had done the leg work for him in presenting a coherent argument for the importance of funding medical research: http://www.amrc.org.uk/challenge
Personally, I think it’s a great example of 1)how to translate the passion/expertise held by scientists into a resource which justifies science spending and 2)engage policy makers.

Spot on. I was preparing something along very similar lines – but you beat me to it in such a masterful way, all I need to do is subscribe it.
Thanks, Shane.

Thanks Shane
Couldn’t have put it better myself.
This is an excellent blueprint for a short sharp campaign, which I was calling for when I wrote this in the Guardian: “Scientists must fight for their funding:
Dr Evan Harris issues a call to arms to British scientists facing swingeing cuts in funding in the forthcoming spending review” http://www.guardian.co.uk/science/blog/2010/aug/27/scientists-fight-funding-spending-review
On point one I should stress that I said that the Libel Reform Campaign had not yet been successful and that, paradoxically, Simon’s Singh’s clear victory in the court of Appeal – while welcome of course – did not assist the campaign as much as defeat would have!